About The Crossroads Retreats Charity

Crossroads retreats is a charity aimed at providing top quality development support for people at times of significant change or upheaval in life.

We recognise there are certain times in life when the established structures and patterns of our lives break down for some reason or another.

These ‘crossroads times’ are important. If we handle them well, and don’t allow ourselves to be derailed, we grow into fuller, stronger human beings. We learn about ourselves, and others, and discover much more of our true strength and character when traditional props are taken away.

The retreats are run by trained facilitators and coaches, most of whom earn their living in professional executive development, but who volunteer their time for this. The aim of the charity is to make this kind of development available to people who would not otherwise have access to it.

The practice of ‘retreating’

The other key aspect of the work is to restore the value of ‘taking time out on retreat’ in today’s pressured world. The practice of ‘retreating’ is centuries old and has long been a core spiritual practice in most wisdom traditions.

But we have lost sight of this in the modern world and have therefore lost the depth it brings. This affects our ability to make wise, grounded, choices and can leave us with a sense of having life ‘done to us’, caught up in the whirl rather than being in control of our own destiny.

The crossroads retreats are inspired by ancient monastic and spiritual practices that enable each of us to ‘ground’ ourselves in our own truth and unique path in life.

The founder of Crossroads, Chris Blakeley, is a lay monk and spiritual director and all the crossroads team regularly attend retreats in their own traditions to deepen and strengthen their personal practice. You can find out more about Chris and the leadership team here. 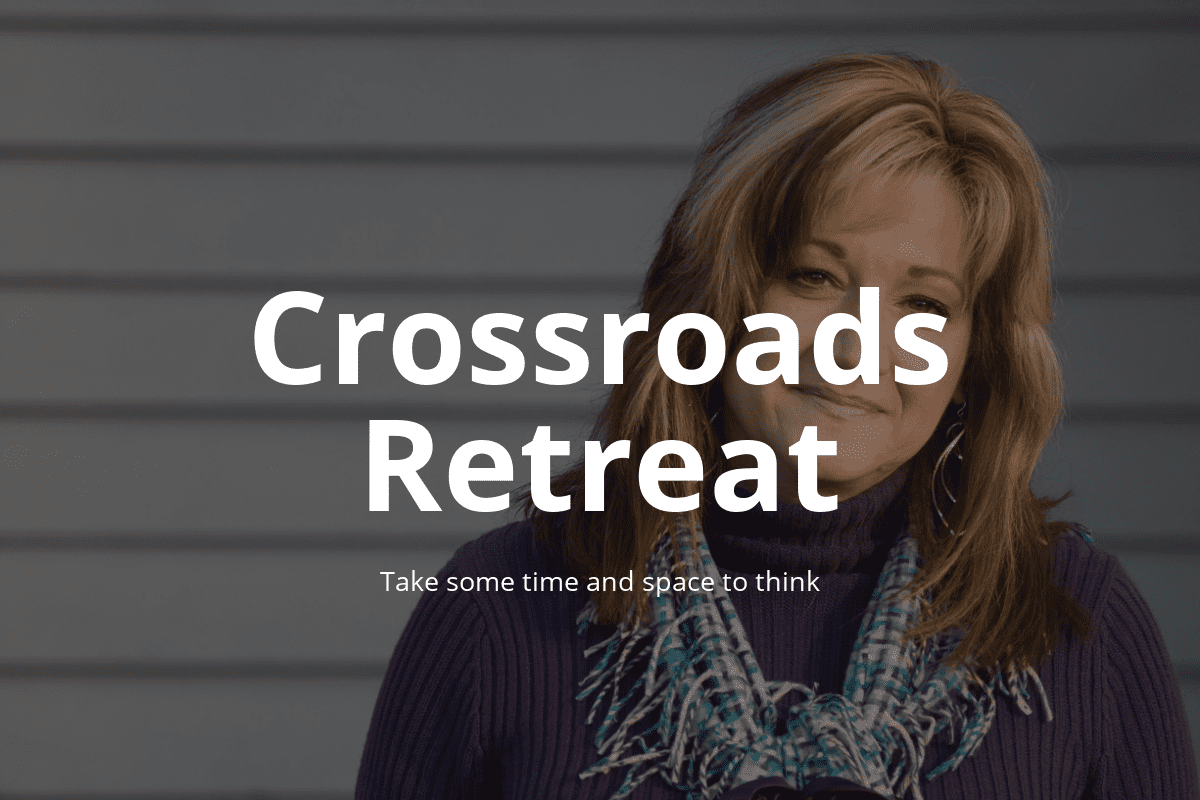 to help you find your way forwards when you have come to what seems to be a juncture or decision point in life. This may be to do with a change at work, in your relationships, in lifestyle or health, or just simply a sense that you know you need something different in your life.

The first Crossroads Retreats were run nearly 20 years ago by Chris Blakeley and Calvin Germain to provide a different kind of learning for people at major transitions in life and who did not have the luxury of access to executive development programmes.

Chris, an expert in Leadership development and Calvin, a Career Management specialist, realised that the most important thing people needed at times like this was space – not just time away on their own, but a ‘held space’ in which they could explore deeply and honestly the questions that life was posing them.

Drawing on ancient monastic practice as well as modern psychology, Chris and Calvin constructed a 2 day guided journey that took people through the big questions in their life and gave them much greater clarity, peace and confidence about who they really were and what they really wanted. This left them in a much clearer and stronger place to make decisions about their future.

Over the next couple of years, Chris and Calvin evolved the process so that it was able to work for pretty much any issue that people came with. They found that the core retreat process worked very well for people in quite different situations, such as relationship breakdown, lifestyle change, health recovery, bereavement and loss as well as changes in career and vocation.

And the key to all these was the capacity to find a place of inner stillness and calm from which to face into whatever life was putting your way.

As the retreats expanded, more guides were needed and so a programme was set up to train people, already experienced coaches in their own right, in the particular and unique skills of ‘holding space’ on a Crossroads Programme.

All Crossroads guides go through this training and a period of mentoring alongside a senior guide before becoming a guide in their own right. There is currently a team of 20 guides who give their time voluntarily to support the work. They tend to regard their journey as a Crossroads guide very highly, as a key development in their own growth, because of the unique combination of spiritual and professional depth that they go to.

Partnerships were established with Retreat Centres all over the country, including Stanton House in Oxford, Turvey Abbey in Bedford, Waverley Abbey in Farnham and most recently Ascot Priory.

We have run specialist retreats for people coming through recovery from addiction, people returning from international voluntary work and for young entrepreneurs. The work has also spread to South Africa where a local Crossroads team is now running regular retreats.

Follow-on retreats were developed for people who valued the process and wanted to make it a more regular things and Crossroads has now run over 400 retreats for people from all walks of life and in many different situations.

Crossroads Retreats exists to help anyone arriving at or stuck at a ‘crossroads’ moment in their lives. Sometimes people reach such moments through deep crisis which may leave them unable to pay the full cost of a retreat. With your help, we can help them experience the benefits of time away on retreat to think through their situation and take a step forward.

Whatever you give will make a difference. You can donate using the button below. Thank you.